Mduduzi Mtshali Live on Stage At The Market 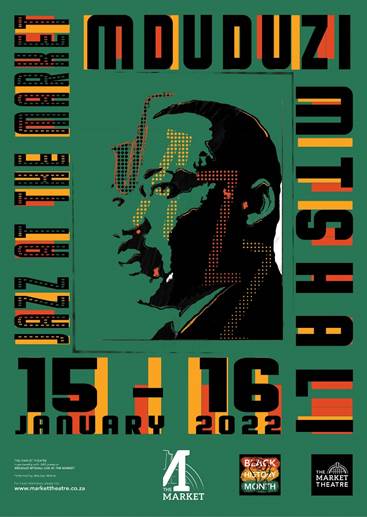 Jazz at the Market is back! The Jazz edition of Live at the Market will not disappoint audiences in the celebration of Dr Martin Luther King Jnr’s Birthday.

The Jazz showcase directed by James Ngcobo starts the year off with a bang, re-introducing Live at the Market Theatre – a series of Musical Events that promise to leave audiences wanting more.

The all-star line-up will include Jazz sensation Mduduzi Mtshali and his band of iconic musicians for two nights only.

“On the third Monday of January each year, Americans mark MLK’s birthday with a public holiday. Africans should too” says the Market Theatre’s Artistic Director James Ngcobo. He further on goes to explain King’s connection to Southern African.

“In 1960, in Atlanta, Georgia, King met with Kenneth Kaunda, who was then the leading anti-colonial leader in Northern Rhodesia (now Zambia). Kaunda went on to play a crucial role in the liberation struggles in southern Africa (Namibia, South Africa and Zimbabwe.

So, it is fitting that the second King speech I read, dealt with the topic of Apartheid South Africa. The speech delivered by King in London in the year 1964 on his to receive his Nobel Peace Prize was short but powerful because it name-checked Albert Luthuli, Nelson Mandela and Robert Sobukwe.

Significantly, King talks about how he “understands the turn to armed struggle as well as calls for sanctions against South Africa, so indeed it is fitting for this reason alone, that Africans too celebrate an Icon like Dr King”.

The performance will be held in the iconic John Kani Theatre, at the home of Jazz at the Market Theatre in New Town. Due to Covid restrictions tickets are limited. The Market encourages all audiences to join in on this night of jazz and wine.

Tickets will be sold via Anthony Ezeoke the Market Theatre Audience Development Officer at a discounted price of R100. This discount is to encourage young people to come and watch a production that is produced by their peers.

To reaffirm its commitment to inspiring creativity, TikTok has partnered with the 28th South African Music Awards (SAMA28), to introduce Read more

Alternative Pop artist Don Calya is set to drop her EP ‘The Arrival’ in early September, just in time for Read more

In celebration of Women’s Day, the SAMAs are proud to announce actress and SAMA award-winner Nandi Madida as one of Read more