SIFU Opens At The Market Theatre 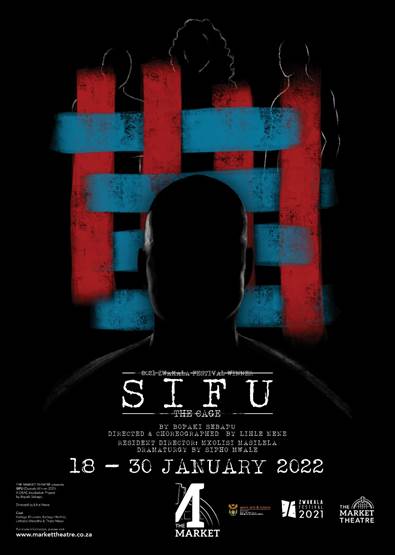 The Market Theatre continues to tickle the curiosity of South African audiences with its distinctive voice in the curation of its artistic programming in 2022.

SIFU was announced the 2021 Zwakala Festival winner in December. Written by Bokapi Sebapu and directed by Lihle Nene, SIFU will premier from 18 – 30 January 2022 at the Barney Simon Theatre.

SIFU is a story that follows the journey of a Masenya, a gardener. Through his journey we get to experience and get a glimpse of the struggles he encounters as he navigates his life. Masenya’ s life crosses paths with a very troubled 16 old girl.

His hopes and dreams are brought into a halt after he meets this young girl which leads to a series of unfortunate events. The Father is also bound by his own demons that emanate from the departure of his wife.

SIFUis a Sepedi production, but its message transcends culture and language barriers. Its stylistically presented in a way that will grasp audiences’ imaginations and provide hard hitting truths of people’s daily challenges.

“The Zwakala Festival is an opportunity for young people to showcase their work and reflect on the daily challenges faced in their communities. Their works will be given a platform that is world class and could set them on the path to success. This is a perfect platform of leveraging on young people’s love for the arts while also providing an outlet for their daily struggles” said Mxolisi Masilela the Festival Director.

The Zwakala Festival is sponsored by the Department of Sports, Arts and Culture Incubation programme.

The festival is an annual event that seeks to give fresh and young talent a space to showcase their work.

The festival continues with its objective of finding and giving space to emerging artists who are really shaping the future narrative of the arts.

This formidable young and passionate cast will draw younger crowds creating a wider appeal for the production.

SIFU…tickets will be sold via Anthony Ezeoke the Market Theatre Audience Development Officer at a discounted price R240 for 4 tickets.

This discount is to encourage young people to come and watch a production by their peers.

Catch this unmissable production from the 18th to 30th January. Book your tickets NOW!

Following the huge success of Jozi’s latest trendy spot, the MmohoBlock Market at the Waterfall Park in the Mall of Read more